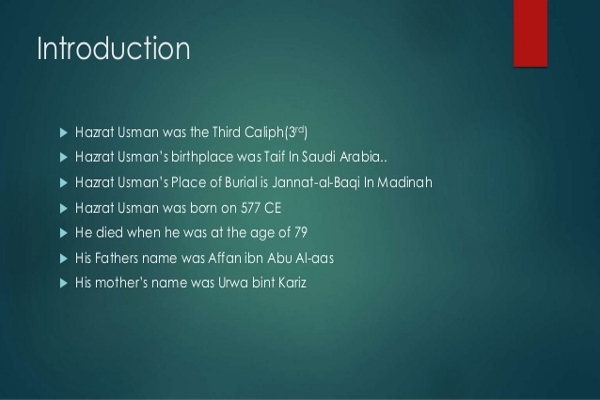 Hazrat Usman-e-Ghani (R.A) were one of the Companions of Prophet Muhammad (s.a.w.w), who were given the reward of Heaven by Prophet Muhammad (s.a.w.w) in the world.
Their name was Usman bin Affan (R.A) and Their titles include “Al Ghani” (The Generous) and “Zun Noorain” (Possessor of Two Lights).
Hazrat Usman Ibn-e-Affan belonged to Banu Umayyia, clan of the Quresh. Their name as by the Patronymic traditions was Abu Amr. He belonged to a rich family of Makkah. He was borned 6 years after the incident of Amul-Feel in Taif, 573 C.E.

In the early stage of Islam he was one of the literate men both in Kuffars and Muslims. His family was one of the respectful family of Makkah. When migrated to Madinah from Makkah, he owned a well of fresh water from a Jew and gave it free to the Muslims, who were in deep trouble by absence of fresh water in the Holy city of Madinah.

Hazrat Usman (R.A) participated in many battles with Prophet Muhammad (s.a.w.w) against the Kuffars. On 5th Hijri, he was set to detention by the Kuffars in Makkah on sending him for the prior information for reciting Hajj by Prophet Muhammad (s.a.w.w). The Kuffars set out the rumor that they had killed Hazrat Usman (r.a) upon which Prophet Muhammad (s.a.w.w) took an Oath by his 1,400 Companions (r.a) under the tree of Babool. Prophet Muhammad (s.a.w.w) made his left hand to the Oath as the hand of Hazrat Usman (r.a). This incident is the most popular in the history of Islam and is termed as “Oath of Rizwan (Bait-e-Rizwan).
Hazrat Usman (r.a) passed approximately 12 years of His great Caliphate after the Martyrdom of Hazrat Umar (r.a). The most important work done in His Caliphate was the rebuilding of “Masjid-e-Nabwi” He made it 3 times greater than its original shape and area.
The most beautiful work which Muslim Ummah can’t forget till the day of Judgment was publishing of the Holy Quran in the form of a book. So, in this way Quran was being presented first time in the form of a Holy Book and was sent to different countries to the Muslims.
On the 18th Dhul-Hajj, Friday 35 Hijri, when He was reciting the Holy Quran in His home in the position of Fasting, was being martyred.
He is buried in the blesses graveyard of Madina Shareef calld Janath-al-Baqia
Sayings of Prophet Muhammad (s.a.w.w):