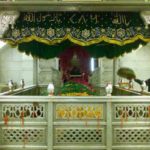 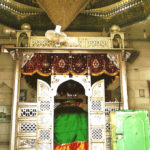 A third Party Video showing Urs sharif from past years.

Children of Hazrath Gharib Nawaz (R.A)
2. Hazrat Khwaja Hissamuddin Chishti (R.A)
He was the 2nd son and was also a great saint as well, he possed the quality of salvation, he made tough excessive for self-purification at the age of 45, he disappeared from the human eyes and joined religious fraternity.
3. Hazart Khwaja Ziauddin Abu Sayed (R.A)
He was the youngest son of Khwaja Gharib Nawaz(R.A) his mazar-e-mubarak is in the premise of the shrine.
4. Hazrat Bibi Hafiza Jamal (R.A)
She was the only daughter of Huzoor Gharib Nawaz (R.A) she was of great religious personality. she guided thousand of women to the righteous path. her mazar-e-mubarak is located just near the mazar of Huzoor Gharib Nawaz (R.A).