The cemetery has been demolished by forces loyal to the Wahhabi-Saudi alliance in 1806 and around the years  1925/ 1926.
At the beginning of the Wahhabis of Najd’s nineteenth century (1806) control over Mecca and Medina, they demolished many of the religious buildings including tombs and mosques, whether inside or outside the Baqi, in accordance with their doctrine. These were razed to the ground and plundered for their decorations and goods.
The Al-Saud clan regained control of Hijaz in 1924 /1925). The following year King Ibn Saud granted permission to destroy the site with religious authorization provided by QadiAbd Allah ibn Bulayhid, and the demolition began on 21 April 1926 /1925)by Ikhwan (“The Brothers”), a Wahabbi religious militia.The demolition included destroying “even the simplest of the gravestones”. British convert Eldon Rutter compared the demolition to an earthquake: “All over the cemetery nothing was to be seen but little indefinite mounds of earth and stones, pieces of timber, iron bars, blocks of stone, and a broken rubble of cement and bricks, strewn about.”
The second demolition was discussed in Majles-e Shora-ye Melli  (The National Consultative Assembly of Iran) and a group of representatives was sent to Hijaz to investigate. In recent years, efforts were made by Iranian religious scholars and political figures to restore the cemetery and its shrines.Both Sunni and Shia protested against the destruction and rallies are held annually. The day is regarded as Yaum-e Gham (“Day of Sorrow”). Prominent Sunni theologians and intellectuals have condemned the “Unfit” situation of the al-Baqi cemetery but the Saudi authorities have so far ignored all criticism and rejected any requests for restoration of the tombs and mausoleums.
Though nowadays the situation of the Baqi is better than the time of demolition but there is an Acrimonious memory in the memories of the Muslim who visited there in that time.

Jannat al -Mu’alla   ‘Garden of the Mu’alla’‎, also known as the Cemetery of Ma’la  and Al-Hajun, is a cemetery to the north of the Masjid al-Haram in Mecca, Saudi Arabia. It is the place where Prophet Muhammad’s (Peace be upon them) wife, grandfather, and other ancestors are buried.
Tombs in this cemetery were demolished in 1925, the same year that the Jannat al-Baqi’ cemetery in Medina was demolished by Saudi King, Ibn Saud

Jannatul Mualla before 1925, during the Ottoman period. 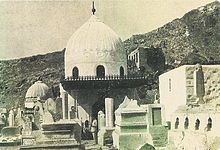