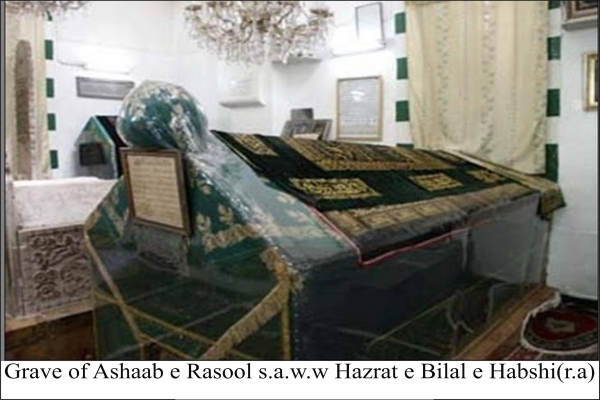 The Urs of  Hazrat Bilal Habashi (Radi Allahu anhu) in  Syria is on 20th Muharram 1440 Hijri.
This is approx Monday 1st October 2018   (Depending on the Lunar date of your country).
Hazrat Bilal (R.A) was a black African primarily belonging to the Western Arabia. He was born in Abyssinia, also known as Ethiopia in the 6th Century A.D. His father, Rabah was an Arab and his mother, Hamama was basically an Abyssinian. Both of his parents were in custody of a rich Qureyshi person in Makkah known as Umayyah ibn Khalaf ibn Safwan, thus he (R.A) grew up as an enslaved child. He had to go through a lot of difficulties in his acceptance of Islam being a slave at the hands of non believers.

He was usually identified as “Bilal al-Habashi” as he belonged to Ethiopia, also called “Habsh” at that time. He (R.A) was a tall man, with dark brown complexion and thick hair. Hazrat Bilal (R.A) attained the greatest status of being Sayyid al-Mu’azzineen (leader of the Mu’azzins) which shows that there is no room for discrimination in the Religion of Peace on the basis of any cast, color or creed etc. He (R.A) was loyal, much loved and one of the most devoted companions of the Holy Prophet ﷺ.

First Slave To Have Embraced Islam
Although Hazrat Bilal (R.A) was a bondservant, but he had great conscious and insight due to which he never liked the existing man-made religious beliefs and corrupt codes and morals of living in the entire Arabia. Therefore, with the arrival of Islam, it took him no time to know about its rightfulness. He (R.A) did not care about the probable tough times in terms of facing oppression and torment of the disbelievers and became the very first slave to believe in Allahand His Apostle ﷺ.
Bearing The Nastiest Sufferings Being An Early Muslim
The master of Hazrat Bilal (R.A), Ummayah was a strict non believer and follower of his religious thoughts. When the Messenger ﷺ of Allah announced about His Prophet Hood and called everyone to Islam, Ummayah was among the top Qureyshi Chiefs who readily rejected Him and were ready to abolish Muslims from the surface of the earth. When he came to know about Bilal al-Habashi having secretly accepted Islam, he tortured him (R.A) severely which is regarded as the worst kind of anguish inflicted upon the early Muslims in Makkah. The infidels tried all sorts of physical torture on him including making him on the burning sand and keeping him chained. They tried their best to revert him back to the age of darkness, but Hazrat Bilal (R.A) stood firm on his Islamic faith and used to respond by saying “There is none to be worshipped but Allah.” and Ahad, Ahad (Allah is One, Allah is One).
This shows the extraordinary level of persistence of Hazrat Bilal (R.A) on his religious belief and his reliance in Allah SWT.

Becoming A Free Muslim
After going through a series of pain and ordeal at the hands of his master and other Qureyshi non believers, Hazrat Bilal (R.A) finally got his freedom when Hazrat Abu Bakr Siddiq (R.A) came to know about his condition and set him free from slavery after paying a considerable amount of money to his master. He was declared a free Muslims after that by Sayyindina Abu Bakr (R.A). Hence, Hazrat Bilal (R.A) set an extraordinary example of staying firm on the Islamic Conviction and bearing all kinds of torments in this cause.
Having An Honor Of Being the First Muezzin
Hazrat Bilal (R.A) had melodious and loud pitched voice. When, in the second year of Hijrah (Migration to Madina), the Call to Prayer was started by Rasulullah ﷺ on hearing the account of his companion`s dream about it, Bilal al-Habashi (R.A) was given privilege by the Holy Prophet ﷺ to become the very first Muezzin (Caller to Salah from Mosque) in the history of Islam due to his exceeding piety and love for Namaz. According to an authentic narration:

“Hadrat Bilaal (R.A) used to give the Fajr Adhaan from the roof of the house of a lady from the tribe of Banu Najjaar. Her home was joined to the Masjid. From the time of Sehri he used to sit on the roof waiting for the time of Fajr. When it was time to commence the Adhaan then he should stretch his limbs, and make the following Du’a after which he gave the Adhaan.
‘Oh Allah I praise you, and I desire that You become aid to the Quraysh to establish Your Deen’

The woman from whose roof he gave the Adhaan said that there was not a day that he did not mention this Du’a.” (Abu Dawud)

It shows that Hazrat Bilal (R.A) used to perform his duty of giving Adhan with great punctuality and also prayed to the Almighty Lord for making spreading of Islam in Makkah easy for Muslims. He (R.A) remained the leading Muezzin till the Holy Prophet ﷺ passed away. He did not perform Call to Salah regularly again because of his delivering of Adhan being liked to Rasulullah ﷺ and missing Him. Eventually, he (R.A) left Madina too due to same reason. He (R.A) gave Adhan once on the request of Second Caliph, Hazrat Umar (R.A) who had visited Damascus. Upon hearing this, Muslims rushed towards masjid before Fajr prayer in order to listen to Hazrat Bilal (R.A) giving Adhan once again. The whole congregation burst into tears on that day according to various narrations.
Criticism Over His Manner Of Adhan And Its Effects
The mode of speech of Bilah al-Habashi (R.A) was not normal, and his tongue could not pronounce the words same as others. When he (R.A) used to give Adhan (Call to Namaz), other Muslims passed judgments on him not being able to articulate the wordings of Adhan in the right way. Thus, on the occasion of one Fajar Salah, when he did not perform this religious act, the morning on that day would not prevail even after quite a time.
People went to the Messenger ﷺ of God to ask Him about this matter. The Angel Jibrael A.S (Gabriel) also came to Rasulullah ﷺ and told Him about Allah`s Dislike for people who criticized Hazrat Bilal (R.A) for Adhan. The Sun will not rise until Bilal al-Habashi (R.A) gave the Adhan. Thus, his call to prayer was even recognized highly up in the heavens and it shows how effective his mode of giving Adhan was!
Always Being With The Prophet ﷺ
Hazrat Bilal (R.A) spent his entire life in the true service of Islam and the Messenger ﷺ of Allah. He remained with Hazrat Muhammad ﷺ till He (PBUH) lived on earth. Wherever Rasulullah ﷺ visited, he (R.A) would accompany Him. When he would give Adhan, people would come to know that the Holy Prophet ﷺ had arrived in their area. He (R.A) learned and acquired nearly all the great Personality characteristics of the Apostle ﷺ of God by spending a lot of time with Him. He (R.A) was also given authority to control matters concerning helping the needy from whatever Rasulullah ﷺ had with Him. He also fought in all battles along with the Holy Prophet ﷺ and even continued doing it His passing away just for sake of upholding the name of Allah`s Religion.
Enduring Hunger And Having Immense Fear Of Allah SWT
Hazrat Bilal (R.A) used to go many days without eating enough food. He always remained grateful to the Almighty Lord for everything he had and never complained about lack of anything. He (R.A) also feared the Creator of the world of the worlds so much that he used to observe Soum (Fasting) occasionally.
According to one of the relations:

The above narration shows that Hazrat Bilal al-Habashi (R.A) had great fear of Allah SWT and used to fast to the extent that the Messenger ﷺ of God praised him for this quality and congratulated him of Paradise in his life.
In short, Hazrat Bilal (R.A) was a man of extraordinary qualities who devoted his entire life in the service of Islam. He became the earliest slave to have agreed to the Message of Allah and His Messenger ﷺ. He also happens to be the very first Muezzin in the history of Islam. He had strong faith in the Almighty Lord, and lived his life according to the true essence of the teachings of the Religion of Peace. Hazrat Bilal (R.A) was one of the most beloved companions of the Holy Prophet ﷺ. In his last days, he (R.A) fell ill while he was in Syria, and died at the age of sixty.
https://www.youtube.com/watch?v=CZvxOHogn7g