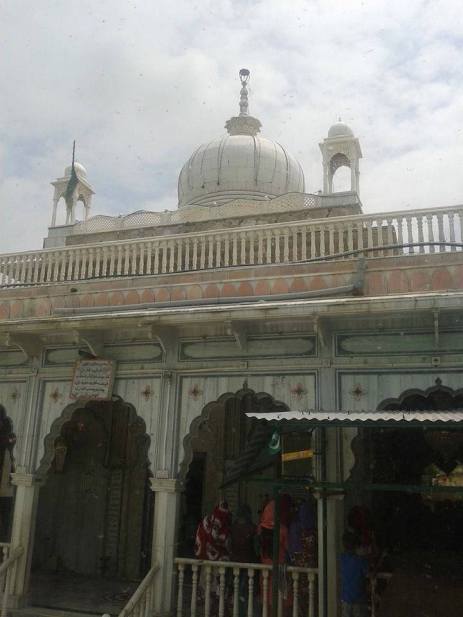 Urs Sharif  is on 14th Rajab 1438 Hijri
Therefore this year it falls on Approx Wednesday 12th April 2017
(Depending on Lunar date of your country).
Khwaja Hussamuddin Chishty (R.A.) (Sambhar Sharif) is Sultan-ul-Hind Khwaja Gharib Nawaz (R.A.)’s dear grandson. The title he has been given is ‘Jigar Sokhta’
For those who want to go there: On the ‘Jaipur – Ajmer Highway’ comes a village ‘DUDU’ – that is where you enter and proceed to the village ‘Naraina’ and then comes Sambhar Sharif- it’s about 30 – 40 kms inside from ‘dudu’ but it takes about an hour to get there..
The dargah is near the famous Sambhar Lake- there is also a railway station ‘Sambhar Lake’
Indeed they are very fortunate who get ‘called’ there! Urs: 13-14 Rajab.
The Shrine of Khwaja Hisamuddin Jigar Sokhta (R.A.) the grand son of Hazrat Khwaja Moinuddin Chishty (R.A.) is located on Dudu road about 100 Kms. away from Ajmer.
Children of Hazrath Gharib Nawaz (R.A):
1. Hazrat Khwaja Fakhruddin Chishty (R.A)
He was the eldest son of Khwaja Gharib Nawaz (R.A) he was a great saint and a scholar as well, he died in Sarwar town some 40 miles away from Ajmer, his URS is celebrated on the 6th of shaban every year with great Favour.
2. Hazrat Khwaja Hissamuddin Chishti (R.A)
He was the 2nd son and was also a great saint as well, he possed the quality of salvation, he made tough excessive for self-purification at the age of 45, he disappeared from the human eyes and joined religious fraternity.
3. Hazart Khwaja Ziauddin Abu Sayed (R.A)
He was the youngest son of Khwaja Gharib Nawaz(R.A) his mazar-e-mubarak is in the premise of the shrine.
4. Hazrat Bibi Hafiza Jamal (R.A)
She was the only daughter of Huzoor Gharib Nawaz (R.A) she was of great religious personality. she guided thousand of women to the righteous path. her mazar-e-mubarak is located just near the mazar of Huzoor Gharib Nawaz (R.A).

This video is provided by thrid party thus we have no control over the quality.