Hazrat Khwaja Qutubuddin Bakhtiar Kaki (R.A) of Delhi in his book ‘Munis-ul-Arwah’ writes as under :
” During my twenty years company with my ‘Shaikh’ (spiritual leader), i did not find any other person , except Fakhruddin so near to him. ”

The Khuddam-e-Khwaja { Decendents of Hazrat Khwaja Syed Fakhruddin Gurdezi (R.A) } are also referred to as Mujavirs, Syedna, Sahibzadas, Khudma, Gaddinashins etc. by the devotees, and pilgrims, who pour all kinds of offerings (Nazar) upon them, in the name of Khwaja Moinuddin Chishty.
Khwaja Hussain Nagori (R.A) has alluded the Khadims of Khwaja Sahib as equivalent to Ridwan (the door keeper of heaven), and this shows how great Saints of the time held the Khadiman-e-Khwaja in high esteem, and appreciated their role.
The Mazar-e-Aqdas (Holy Shrine) of Hazrat Khwaja Gharib Nawaz (R.A.) always remained under the custody and care of the Khadim community from the very beginning, which proves that they are the custodians of the Holy Shrine (Mazar-e-Aqdas) in the true sense of the word. All the mundane rituals & traditions of the Mazar-e-Aqdas (Holy Shrine) are performed by Khadims alone.
“KHUDDAM-e-Khwaja’s RELATION WITH THE SHRINE IS NOT ONLY ANCIENT BUT INTIMATE”:-
The keys of the Holy Shrine including the Toshakhana are in the custody of the Khadims since inception according to centuries old Khalid Bardari system of our ancestors.
Only the Khadims have the privilege to open (after giving Azan at the door step of the Shrine) & close the doors of the Holy Shrine for centuries in religious & hereditary capacity.
Khadims are the only one’s entitled to take Zaireen (Pilgrims) for Ziyarat (Darshan) at the Holy Shrine, and they have the right to receive all kinds of Nazar & Niyaz (offerings) at the Holy Shrine (Mazar-e-Aqdas) of Huzoor Khwaja Gharib Nawaz (R.A.).
Undoubtedly, the Khadims, who have been attached to the Shrine since its inception, played a key role in the smooth functioning and in keeping strict discipline in the performances of these rituals and ceremonies. As a result, they often invited the ill-will and wrath of pilgrims and other officials. But their genuine concern and enforcement of established customs and rituals, showing strict adherence to the humanitarian approach of the Saint, was always upheld by the authorities.

Offerings and Judicial Pronouncement
For many years, khadims have been questioned about the right of receipt of offerings by the followers of Hazrat Khwaja Sahib. Efforts have been made to deprive khadims of their rights. They make anti Khadim propaganda and try to mislead people openly not to make any offerings to them. They also condemn the act of those who express their devotion to them and make offerings in monetary forms. This matter was finally resolved by the Supreme Court of India when the following Act was passed.

“The Khadims right to receive offerings which has been judicially recognized in no manner affected or prejudiced by the impinged provisions. Even after the act came into force pilgrims might and would make offerings to the khadims and there is no provision in the act which prevents them from accepting such offerings when made.” AIR-1961 S.C. Page 1417. 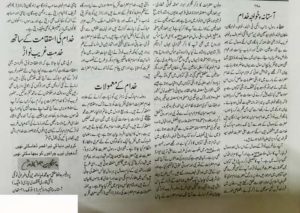 The concept of Nazar- o -Niyaz, according to Sufi customs, specially Chishty trends is meant for those who are attached and serve the shrine and are called Majaveranor “Khuddam” Since the inception of the shrine, Khuddams were attached to the shrine and served here for centuries performing rituals and preaching noble Chishty ideals. Muhammad Bin Tughlug(1324) Sultan Mahmud Khilji(1455),Muzaffar Shah of Gujrat (1396), Rao Maldev of Jodhpur, Sher Shah Suri(1545), all offered Nazar- o –Niyaz to these Khuddams.
In lieu of their past services and attachment to the Dargah, these custodians of Shrine were offered land grants by Akbar and his successors, all of whom held them in high esteem and venerated many of the khadims of their age. Further more, it is because of their long association with the Dargah that people from all walks of life respect and venerate these Khuddam and rightly consider them the custodians and Gaddi Nashin of the Dargah.

If you, or your loved one’s are intending to come to Ajmer Sharif for Ziarat (Pilgrimage) then please contact us on the details below, so we can assist you in every way we can, to make your Pilgrimage swift, peaceful, effective, blessed & prosperous!
If you would like to take part by making an offering for Fathia, Nazar-o-Niaz, Qurbani,or Gyarmee ,Chattie fathia sharif or you would like to take part in Urs of Wali-Allah’s (All Sufi Saint’s from all Silsila’s); you can send your heartily offerings & donations direct to us safely now! or in the future.
Also in the Mosque inside Darbar Sharif we can arrange for Dua-e -karima, khatam-e- khwajgan, Dua-e-Shifa,Ayate karima and similar dua’s on your behalf . We can arrange for food to be made in Big deg & Small deg at Darbar .
We can also arrange on your behalf flowers for Mazar Sharif of Hazrat  Moinuddin Chishty(R.A)  and Chadder (Shrowd) for Mazar Sharif or present Sandal wood in Mazar Sharif. Also we can arrange for lungar (Feeding) the poor people. Also arrangements can be made for Haqiqa and Bismillah Sharif. The Ajmer Sharif Dargah Administration also organise marriages for poor people as well as Education “Taleem”.
The Darbar Sharif arranges for all poor tourist in Ajmer sharif , lodging boarding, Transportation and food, clothes for the poor Guests. Also provided are tickets for trains & bus and other expenditure while at Darbar Ajmer Sharif. Since they are treated as the Guest’s of Hazrat Khwaja Moinuddin Chishty  (R.A).
You can send your heartily offerings & donations direct to us safely via Western Union or Money Gram money Transfer. now! or in the future,
please contact: Peer Sahib on :
0091 982 917 2652 (Whats App Enabled) or
0091 9983 3484 28   (Whats App Enabled) or
0091 9828111592   (Whats App Enabled)
0091 978 364 6668  (Whats App Enabled)
Email:ajmerkhwaja@yahoo.com  or khwajazafarchishty@gmail.com or
syedazharchishty@yahoo.com
Alternatively you can visit our website:
http://www.ajmergharibnawaz.com
http://www.khwajamoinuddinchishty.com
http://www.ajmerkhwaja.com
http://www.kgn-sanjari.com  … (Details of Fathia & various Sufi Dargah’s in the world)
Blog: https://khwajagharibnawaz.org

Donations for Ajmer sharif can now be safely taken online. This is the most secure & accountable system we have established. The link Below will take you to our main webpage where you can donate safely via Paypal platform.
http://www.ajmergharibnawaz.com/donation-for-ajmer-sharif-dargah.html
For further information on work for  Humanity & Charitable causes administered by Ajmer Sharif please visit link below:
Humanity and Charitable causes
(Terms & Conditions apply)