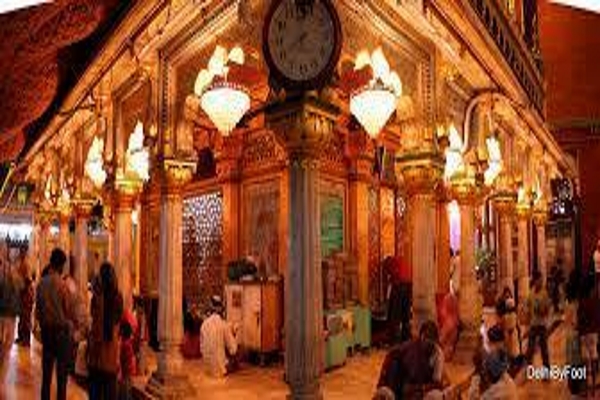 Sultan-ul-Mashaikh, Mehboob-e-Ilahi, Hazrat Shaikh Khwaja Syed Muhammad Nizamuddin Auliya (R.A) (1238 – 3 April 1325), also known as Hazrat Nizamuddin, was a famous Sufi saint of the Chishti Order in the Indian Subcontinent, an order that believed in drawing close to God through renunciation of the world and service to humanity. He is one of the great saints of the Chishti order in India.

“In Allah’s garden you gather roses,
Being drunk with divine mysteries:
Hazrat Mehboob-e-Elahi — the beloved of Allah,
O, how I long for the attar of your company”.

His predecessors were Fariduddin Ganjshakar, Bakhtiyar Kaki and Moinuddin Chishti. In that sequence, they constitute the initial spiritual chain or silsila of the Chisti order, widely prevalent in the Indian subcontinent.

Nizamuddin Auliya, like his predecessors, stressed love as a means of realising God. For him his love of God implied a love of humanity. His vision of the world was marked by a highly evolved sense of secularity and kindness. It is claimed by the 14th century historiographer Ziauddin Barani that his influence on the Muslims of Delhi was such that a paradigm shift was effected in their outlook towards worldly matters. People began to be inclined towards mysticism and prayers and remaining aloof from the world.

Hazrat Nizamuddin Aulia (d. 1325 A.D.) represents in many ways the pinnacle of the Chishti Order of the Sufis. Hazrat Baba Farid, his spiritual guide, said to him on appointing him as his successor: “Be like a big tree, so that Allah’s creation, the human beings in their vast multitudes, may find rest and solace under your shadow.” This partly explains why he admitted so many (according to some, including Barani, too many) men into the Chishti order as his disciples. Another reason has been clearly formulated in this way: “History, nonetheless, bears out the wisdom of his open-ended policy . . . To far-flung areas of Uttar Pradesh, Rajastan, Gujarat, Bihar, Bengal and the Deccan, Hazrat Nizamuddin Aulia sent able disciples well versed in the Chishti practices, yet sensitive to the needs of the local populace.”

With regard to the Sufi path, Hazrat Nizamuddin Aulia taught the following: “For a dervish, three things are necessary. They all begin with an ‘ain’ (an Arabic letter), i.e., Ishq (love), Aql (intelligence) and Ilm (knowledge). Let us discuss these three qualities one by one.
Sufism is, in its essence, the way of love. Love is considered to be a spiritual alchemy by means of which the baser qualities of a human being are transformed into higher ones. In this respect it suffices to say that Hazrat Nizamuddin Aulia is known as Mehboob-e-Elahi, the beloved of Allah. Of course the spiritual status of a beloved is much higher than that of a lover.
‘Intelligence’ changed in the hands of Hazrat Nizamuddin Aulia into wisdom. His wisdom manifested itself in the shape of service to humanity. About him it has been said: “He was not a miracle-monger of the ordinary sort. He never flew in the air or walked on water with dry and motionless feet. His greatness was the greatness of a loving heart; his miracles were the miracles of a deeply sympathetic soul. He could read a man’s inner heart by a glance at his face and spoke the words that brought consolation to a tortured heart.”
About ‘knowledge’, the third faculty of a dervish, it can be said that Hazrat Nizamuddin Aulia was one of the greatest scholars of his day.

He wanted to become a Qazi, but gave it all up in his pursuit of inner knowledge. After becoming a Mureed (spiritual disciple) of Hazrat Baba Farid, he lived in extremely poor circumstances. Seeing him, a former friend expressed great surprise as he remembered Hazrat Nizamuddin Aulia as one who had begun a very promising career as a scholar. When Hazrat Nizamuddin Aulia told all of this to Hazrat Baba Farid, his murshid (spiritual guide) suggested that he should recite the following couplet to his friend:

“You are not my fellow traveller.
Tread your own path
May you be affluent.
And I downtrodden”.

Then Hazrat Baba Farid ordered him to take a tray of food from the kitchen and carry it on his head to his friend. After doing so, he recited the verse. This deeply moved his friend.
One day, someone told a story of a certain saint who expired while slowly repeating the name of Allah. The eyes of Hazrat Nizamuddin Aulia, who was listening to this story, filled with tears and he recited this quatrain:

I come running to the end of Your street,
Tears are washing and washing my cheek.
Union with You — what else can I seek?
My soul I surrender as Your name I repeat.

If you, or your loved one’s are intending to come to Ajmer Sharif for Ziarat (Pilgrimage) then please contact us on the details below, so we can assist you in every way we can, to make your Pilgrimage swift, peaceful, effective, blessed & prosperous!
If you would like to take part by making an offering for Fathia, Nazar-o-Niaz, Qurbani,or Gyarmee ,Chattie fathia sharif or you would like to take part in Urs of Wali-Allah’s (All Sufi Saint’s from all Silsila’s); you can send your heartily offerings & donations direct to us safely now! or in the future.
Also in the Mosque inside Darbar Sharif we can arrange for Dua-e -karima, khatam-e- khwajgan, Dua-e-Shifa,Ayate karima and similar dua’s on your behalf . We can arrange for food to be made in Big deg & Small deg at Darbar .
We can also arrange on your behalf flowers for Mazar Sharif of Hazrat  Moinuddin Chishty(R.A)  and Chadder (Shrowd) for Mazar Sharif or present Sandal wood in Mazar Sharif. Also we can arrange for lungar (Feeding) the poor people. Also arrangements can be made for Haqiqa and Bismillah Sharif. The Ajmer Sharif Dargah Administration also organise marriages for poor people as well as Education “Taleem”.
The Darbar Sharif arranges for all poor tourist in Ajmer sharif , lodging boarding, Transportation and food, clothes for the poor Guests. Also provided are tickets for trains & bus and other expenditure while at Darbar Ajmer Sharif. Since they are treated as the Guest’s of Hazrat Khwaja Moinuddin Chishty  (R.A).

Donations for Ajmer sharif can now be safely taken online. This is the most secure & accountable system we have established. The link Below will take you to our main webpage where you can donate safely via Paypal platform.
https://www.ajmergharibnawaz.com/donations/

Devotees in the UK & Western World can now deposit donations via :

Ajmer Sharif Dargah (India) is a registered Charity in England & Wales, Reg No: 1176945