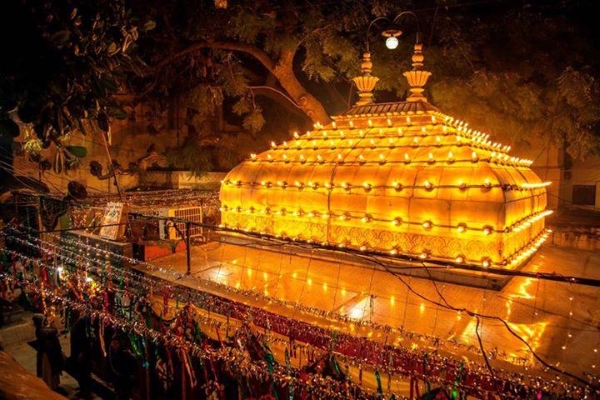 Ab’ul Hasan Yamin al-Din Khusro (R.a), usually known by his pen name as Amir Khusro (or Amir Khusro), is a greatly loved composer of poetry, song and riddles from India. He was born in northern India. His father was of Turkish descent but born in Balkh, Afghanistan, the same region that gave birth to Jalaluddin Rumi. Khusrau’s mother was from Delhi. In 1206 Hazrat Amir Khusrau’s father migrated from transoxiana to delhi but settled in Patiali ( modern Uttar pradesh).
Amir Khusro (R.a) was a Sufi and disciple of Hazrat Nizamuddin Aulia, Mehboob e ilahi (R.a). By the order of his Pir/Sheikh/Spiritual mentor and guide, he developed Urdu language and was famously known as “father of urdu language”. Soon it became the tongue of Sufis both oral and in written forms. Urdu replaced persian language which was used for centuries for administrative work and for bussiness purpose.
Hazrat Ami Khusro (R.a) is often called the “father of qawwali music” — the ecstatic devotional Sufi music of India and Pakistan. He is also credited with the invention of tabla drums, the two hand drums played throughout the Indian subcontinent.Hazrat Amir Khusrau (R.a) was a classical poet and composer who served as court poet to several Delhi sultans.
His songs are still widely sung by Sufis and the devout, in every Sufi qawwali or in sama, around the world. Especially in India and Pakistan.
Hazrat Amir Khusro (R.a)reat Sufi, a wealthy merchant who once exchanged all his wealth for a pair of His Holiness Sultan-ul-Mashaikh shoes, an intellectual gaint of many languages, an artist, a prolific author, a genius musician who invented the ‘sitar’, a versatile composer and a true devoted “Mreed/disciple” of Holiness. He was “All-in-One” type of highly amazing mixture of Divine gifts
Hazrat Amir Khusro (R.A) was the son of Amir Alachin a Turk from Laccheen. His actual name was Saifuddin Mahmood Shamsi. At the invasion of Gengiz Khan he migrated from his native place Kesh near Samarkand to Balkh. Saifuddin was the chieftan of Hazara. Shamsuddin Iltamish the King of Delhi welcomed them to his capital. He provided shelter to the dislodged princes artisans, scholars and rich nobles. Saifuddin was among them.
It was around 626/ 360 A.H/1226 A.D. In 1230 A.D he was granted afief in the district of Patiali (in Etah District-Uttar Pradesh).
He married to BiBi Daulat Naz, who bore him three sons and one daughter. Yaminuddin (Khusro) was one among them born at Patiali, presently known as Hazrat Amir Khusro Nagar in District Etah (U.P.) in the year 652-653 A.H/1252-53 A.D. Yaminuddin’s (Khusro) father Saifuddin was mostly engaged in battles, and was killed in 660 A.H/1260 A.D. Yaminuddin or Khusrau was an intelligent child.
Poetry came to him at the early age of eight. He wrote his first diwan of poetry “Tuh’fatus-saghir” in 1271 A.d.In 1272 at the age of 19 years, Amir Khusrau’s First job was a royal court poet in the with King Balban. He was a royal coutier in more then 7 different Kings,Governors of his time. In the same year 1325 A.d, when Hazrat Nizamuddin aulia (R.a) left this world, soon after 6 months Hazrat Amir khusrau (R.a) also followed his sheikh and left this word with these words:
It is written in books that when Hazrat Amir Khusro, went to see His Holiness Hazrat Syed Nizamuddin Aulia (R.A) for the very first time. It is said that young Amir Khusrau (R.a) went to His Holiness khanqah, but did not entered and remained at the door by remarking, “I shall select my “Peer/Spiritual guide” myself, and if it is bestowed with Divine Power he will converse with me even from distance.” Thus sitting at the door he composed:

Tu an Shah-e-ke bar aiwan-e-qasrat. Kabutar gar nashinad baz garded. Gharib-e mustanande baradar amad. Be ayat andar un ya baz gardad. (You are such a mighty King that if a pigeon sits on your palace, it turns into a hawk. An outsider and a needy person has come at your door, please let him know whether he should come in, or go away). His Holiness who had supernatural powers sent him the following verse in reply: “Biya yet andarun marde haqiqat, Kibama yak nafas hamraz gardad, Agar ablah buwad an mard nadan, Azan rahe ki amad baz gardad.” (The person who knows the truth may come inside so that we may exchange divine secrets between us for a moment. If that person is ignorant, then he should return on the same path from where he has come here.)

Hazrat Amir Khusro (R.a) immediately got up and ran to His Holiness and fell on his feet and wept! His Holiness accepted him as his disciple (murid) and gradually the two became inseparable and attached to each other.
Love is deep rooted in human nature. Every Soul has a natural inclination towards another soul. Love in fact, –beautifies the soul, and beauty of the soul resides in love for humanity. Love, the Sufis believe is greater than religion. Love is the essence of all creeds. Every worshiper worships God out of Love. Love enslaves him. The true majestic welcomes love whatever its guise. One who has a perfect insight beholds God in everything.

If you, or your loved one’s are intending to come to Ajmer Sharif for Ziarat (Pilgrimage) then please contact us on the details below, so we can assist you in every way we can, to make your Pilgrimage swift, peaceful, effective, blessed & prosperous!
If you would like to take part by making an offering for Fathia, Nazar-o-Niaz, Qurbani,or Gyarmee ,Chattie fathia sharif or you would like to take part in Urs of Wali-Allah’s (All Sufi Saint’s from all Silsila’s); you can send your heartily offerings & donations direct to us safely now! or in the future.
Also in the Mosque inside Darbar Sharif we can arrange for Dua-e -karima, khatam-e- khwajgan, Dua-e-Shifa,Ayate karima and similar dua’s on your behalf . We can arrange for food to be made in Big deg & Small deg at Darbar .
We can also arrange on your behalf flowers for Mazar Sharif of Hazrat  Moinuddin Chishty(R.A)  and Chadder (Shrowd) for Mazar Sharif or present Sandal wood in Mazar Sharif. Also we can arrange for lungar (Feeding) the poor people. Also arrangements can be made for Haqiqa and Bismillah Sharif. The Ajmer Sharif Dargah Administration also organise marriages for poor people as well as Education “Taleem”.
The Darbar Sharif arranges for all poor tourist in Ajmer sharif , lodging boarding, Transportation and food, clothes for the poor Guests. Since they are treated as the Guest’s of Hazrat Khwaja Moinuddin Chishty  (R.A).
You can send your heartily offerings & donations direct to us safely via Western Union or Money Gram money Transfer. now! or in the future,
please contact: Peer Sahib on :
0091 982 917 2652 (Whats App Enabled) or
0091 9983 3484 28 or
0091 982 8111  592 (Whats App Enabled)
0091 978 364 6668  (Whats App Enabled)
Email:ajmerkhwaja@yahoo.com  or khwajazafarchishty@gmail.com or
syedazharchishty@yahoo.com
Alternatively you can visit our website:
https://www.ajmergharibnawaz.com
https://www.khwajamoinuddinchishty.com
https://www.ajmerkhwaja.com
https://www.kgn-sanjari.com  … (Details of Fathia & various Sufi Dargah’s in the world)
Blog: https://khwajagharibnawaz.org